You are here: Home1 / Recovery News2 / Dabs, Dabbing, Dagga. What are Concentrated Cannabinoids?

Dabs are cannabis extracts that have a significantly higher THC concentration up to 90% as opposed to traditional smoking methods. The concentrate is produced using methods that involve ice water and carbon dioxide, the butane gas. The compounds are either a wax looking output or a glassy resin. Common names include wax, shatter, budder, and butane hash oil (BHO).

A “dab” is basically a “dose” of THC concentrate which is heated on a hot surface and inhaled through a specialised glass pipe or a “rig”. A single “dab” usually consists of one “hit” on the “rig” to produce the same effect as smoking a full joint – or more. This is the most concentrated delivery of THC to the system possible and certainly fits within the realm of advanced stage users. 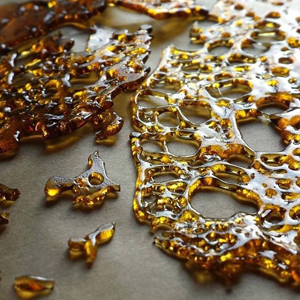 Research regarding the long-term health implications of “dabbing” is still very limited, though what we do know is that “dabbers” do become more susceptible to developing a far higher tolerance to THC. Consequently this leads to more severe withdrawal symptoms than ever experienced on traditional smoking methods. Butane used in the production process poses it’s own toxicity index to the compounds.

Significantly more advanced THC extraction methods have caused a flood of cannabis concentrates to hit the market in South Africa. The extraction methods used to produce dabs are risky in that butane gas is a highly explosive substance in it’s own right.

The combinations of glass pipes and blow torches used in heating the compounds has nicknamed it the “meth of the pot world” due to it’s correlations to the production and consumption of methamphetamines.

Cannabis communities on the internet warn first time users that this is not something you should try.

Smoking dabs or “dabbing” is the extreme end of cannabis and cannabinoid consumption and thus amplifies the traditional symptoms in dealing with marijuana / dagga addiction cases.