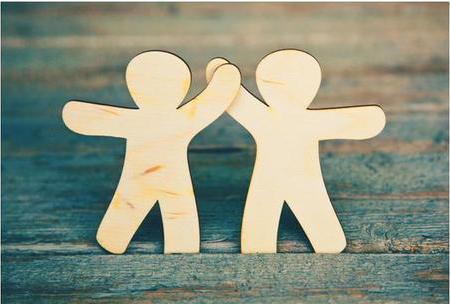 Co-dependency can occur in any type of relationship, including family, work, friendship, and also romantic, peer or community relationships. Co-dependency may also be characterized by denial, low self-esteem, excessive compliance, or control patterns. Narcissists are considered to be natural magnets for the co-dependent.

Co-dependency does not refer to all caring behaviour or feelings, but only those that are excessive to an unhealthy degree.

“Co-dependence is the most common of all addictions: the addiction to looking elsewhere. We believe that something outside of ourselves – that is, outside of our True Self – can give us happiness and fulfillment. The ‘elsewhere’ may be people, places, things, or behaviours or experiences. Whatever it is, we may neglect our own selves for it (4).”

Co-dependents grow up never having learned how to be themselves, or even what their true identity really is. In adulthood this causes them to become over-identified with other people, particular roles, jobs or professions. They basically focus on others problems to avoid having to look at their own stuff. They try to change others – they are those who are heard saying: “I’d be all right if only everybody else would change.”

Co-dependence has also been called a process addiction. It is any compulsive-like behaviour that can interfere with living a balanced normal life and the behaviour of the person causes significant negative consequences.

It has also been called an addiction to suffering, people pleasing and adrenalin. It is a gateway to chemical addictions, as the behaviours associated with co-dependency usually occur prior to using chemicals. Thus the shame and guilt often felt by co-dependents, is often numbed and covered up with chemical and other addictions.

According to Whitfield (1991: pg 5),  Co-dependence is not only the most common addiction, but it is the base from which all other addictions and compulsions emerge. It is an attempt to escape the pain of everyday life by having learned a habitual conditioned response pattern and using maladaptive copying mechanism to survive.

The wounding of our true selves to such an extent, that in order for us to have a survived, we developed a pseudo false self, which now runs our lives. It is thus a disease of lost self-hood. A co-dependent person has little or no sense of self. Their whole lives are spent in extreme acts to meet others’ expectations. How you think and feel about yourself is determined by the behaviour of those around you. So the belief is: “if you nice to me then I am a good person but if you disagree with me then I am a bad person.” You have trust issues, seek fulfillment in pleasing or controlling other people and often feel it’s never enough and you are not enough.

Introspect Coaching helps you to understand Co-dependency. This approach frees people from the stifling and self-esteem damaging idea that they are somehow inferior or defective – bad, sick, stupid or crazy. The condition is treatable. In recovery you learn that you are simply wounded and wounding is learned, mostly experientially and to some extend cognitively. Thus new behaviours assist you in recovery – new perspectives are developed and explored.

HOW DOES IT PRESENT ITSELF?

With the constant amount of energy required to consistently fill the insatiable void inside us from the outside, we often head for burnout. The following stress related medical conditions often accompany codependency:

Co-dependency comes in many forms:

SOME OF THE BEHAVIOURS OF CO-DEPENDENTS:

The root of these behaviours is an absence of intimacy with ourselves and others.

Co-dependency describes behaviours, thoughts and feelings that go beyond normal kinds of self-sacrifice or caretaking People who are codependent often take on the role as a martyr; they constantly put others’ needs before their own and in doing so forget to take care of themselves. This creates a sense that they are “needed” they cannot stand the thought of being alone and no one needing them. Codependent people are constantly in search of acceptance. When it comes to arguments, codependent people also tend to set themselves up as the “victim”. When they do stand up for themselves, they feel guilty.

PATTERNS AND CHARACTERISTICS OF CO-DEPENDENCY.

(From the Co-Dependents Anonymous Big Book)

WHAT DOES RECOVERY MEAN?

Recovery is a multiple step process in learning to uncover our true selves.

Experts in the field generally agree on the 5 stages in the recovery process: